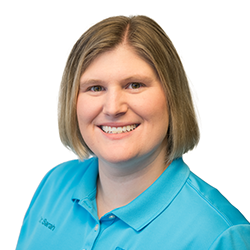 Dr Sarah is originally from Northwest Ohio.  She earned her Bachelor of Arts in Zoology and Pre-Optometry from Ohio Wesleyan University. She attended The Ohio State University in Columbus, Ohio, where she earned her Doctor of Optometry and Master of Science in Vision Science concurrently.  She completed several clinical internships to complete her training. The internships included rotations through various clinical services at Ohio State, a primary care rotation at Family Eye Care Centers in Sandusky and Clyde, Ohio, and an ocular disease rotation at the Dayton, Ohio VA Medical Center. She also participated in a eye care mission trip to Masaya, Nicaragua.

Following optometry school, Dr Sarah completed a residency in Primary Care at Southern College of Optometry in Memphis, TN. She earned her Fellowship in the American Academy of Optometry shortly after finishing her residency.  She has practiced in East Tennessee since 2007 and joined BCEC in 2019.

Currently, Dr. Sarah holds her license to practice full-scope general and medical optometry in Tennessee and Ohio. She is a member of the American Optometric Association and the Tennessee Association of Optometric Physicians. She enjoys spending time with her husband and two sons, hiking and traveling. She is involved with both the Knoxville alumnae association and University of Tennessee chapter advisory board of her undergraduate sorority. She also plays her flute in her church orchestra and is a founding member and officer for The Ohio State University Alumni Club of Knoxville. Dr. Sarah loves taking care of patients of all ages and enjoys that "ah-ha" moment when people see better for the first time or fully understand the problems their eyes are experiencing.